The Carson City Mint was a branch of the United States Mint located in Carson City, Nevada. It was officially established by Congress in 1863, but due to the Civil War, its construction was postponed until about 1869, when the mint opened. It minted 50 issues of silver coins and 57 issues of gold coins from 1870 to 1893, all the coins bearing a "CC" mint mark. The denominations struck here were the dime, twenty-cent piece, quarter dollar, half dollar, dollar, Half Eagle, Eagle, and the Double Eagle. It was originally established to facilitate silver minting supplied by the Comstock Lode, similar to the establishment of the San Francisco Mint to facilitate gold minting supplied by the California gold rush. From 1895 to 1933, the building was used as an assay office for gold and silver, and officially closed as a mint in 1899. In 1939, the Federal Government sold the building to the state of Nevada.

The building housing the mint was first designed by Alfred B. Mullett after he became the Supervising Architect of the Department of the Treasury. The construction supervisor of the mint was Abraham Curry, also known by the nickname, "Father of Carson City". The simple Renaissance Revival style stone face has pairs of round-headed windows as well as a center portico. Today the building is home to the Nevada State Museum, which still holds one of the Mint's presses.

The Nevada State Museum, which uses the foundation of the mint building. 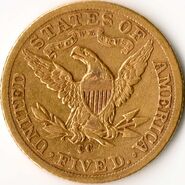 A Liberty half eagle with a "CC" mint mark.

Community content is available under CC-BY-SA unless otherwise noted.