The coin weighed about 3⅓ grams and was composed mainly of copper. It reached a diameter of 20 mm and also had a smooth edge of about 62.83[4] mm. The obverse featured little design, just the statement that the coin was from Deutsches Reich and the year it was minted. The reverse, however, displayed the Reichsadler of the German Empire.[1][2][3] 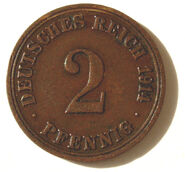 Coin from 1914
Add a photo to this gallery

This article is a stub. You can help Currency Wiki by expanding it.

Retrieved from "https://currencies.fandom.com/wiki/German_2_pfennig_coin_(1873-1916)?oldid=25482"
Community content is available under CC-BY-SA unless otherwise noted.